The Top 10 Expected (& Unexpected) Skills Your Kids Learn Through Coding

From the 2017 Wyoming Elementary STEM Educator of the Year 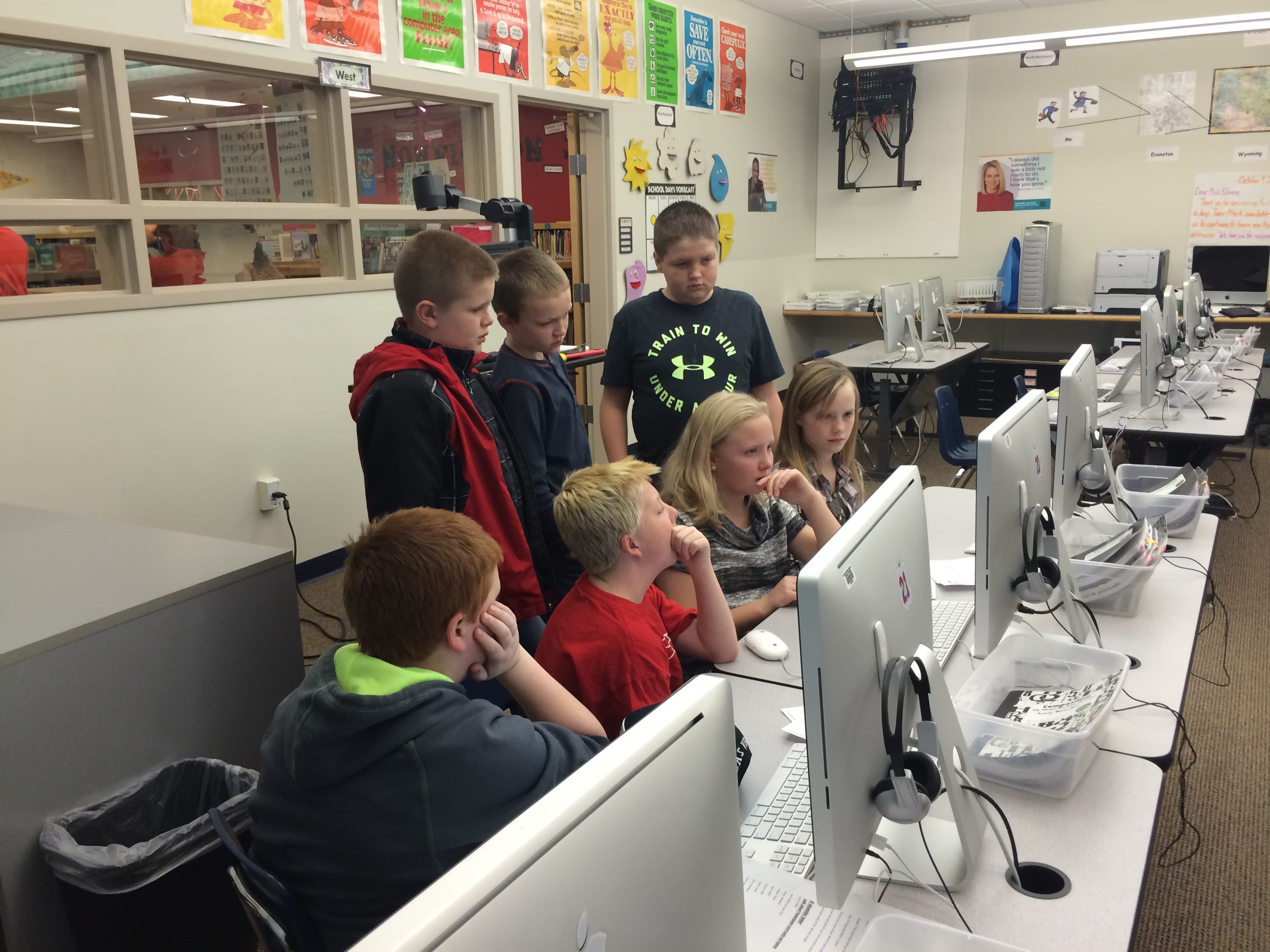 As a technology professional, I wanted my students to become interested in creating the technology they were interested in using. Sparking this desire to spark interest in as many kids as possible led me to becoming an Online Coding Instructor with Create & Learn. And now, I am making a difference in more kids' lives than I ever imagined!

I first heard about teaching coding to elementary students about 8 years ago while attending the Utah Coalition for Educational Technology (UCET) Conference. Coding was completely new to me and something we weren’t teaching in my district, or many schools at all at that time. I believed it would give my students an advantage in upcoming careers because of how technology was becoming integrated into our daily lives, the early days of smartphones and tablets.

I attended a session facilitated by Code.org and learned that if I could get 15 students to complete their coding course, then Code.org would give me $750 for use on classroom supplies, and if 8 of the 15 students were girls, the stipend would be bumped up to $1000. Now I was really interested! I knew that it wouldn’t be too much of a challenge to find girls to code.

In 2017, I was named the Wyoming Elementary STEM Educator of the Year, after teaching over 600 students how to code in grades Kindergarten through 5th. Since then, I’ve exposed students to coding through Code.org, LEGO EV3 robots, Agent Sheets, Agent Cubes, Arduinos, Scratch, MIT app inventor, a “Think Like a Computer Scientist” event, a First Lego League team, and now I teach Robotics, Minecraft, and Scratch with Create & Learn. Through our shared coding experience, I realized there were other skills my students were gaining that were benefiting them on a daily basis. Let me share them with you.

10 Things My Students (and I) Learned through Coding, in No Particular Order

My students and I started this coding course with no prior knowledge of coding, so we worked through the course together. On this journey, we learned to program the same result using different blocks and compared each other’s code to see each other’s thought processes. When someone would get stuck, we would get together and ask what worked and where did it go awry. We started to make it a challenge to write what I called “pretty code”, meaning writing code most efficiently, or using the least number of blocks. I continue to ask my students to make their code “pretty” so that it’s easier to debug and others can understand it.

Overall, this was about an 8 hour, K-8 course these 3rd graders were taking on. So, they were not always going to get the program correct on the first try. This was really frustrating for a number of my students because they were good students and everything usually came easy to them. All of a sudden, they were “struggling”. Really what they learned was to keep working at the problem and not give up. I learned to make sure I was at least three lessons ahead of them, even though sometimes I wanted to give up. I reminded them that nothing was “hard”, just “challenging” and we would get through it together. Also, it was amazing when they figured it out after being stuck for a couple minutes because I knew that feeling as well.

The best part of this process came at state testing time, when one student came up to me and told me that one math problem on the test he was just going to guess on because it was going to take a long time to solve. Then he said he thought of me and all the work we had been doing with coding and realized he could work through it so he did! He said he knew he got it right; a proud moment to see this skill transfer to his life.

My students began looking at the coding challenges in a new way. No longer just solving the puzzle, it became a challenge to break it into smaller steps and then write the code succinctly. They started to ask each other questions “Should I solve it this way or would it be better to do it another way?” They would get up and physically walk through some of the puzzles and then sit down and code their movements. You could hear them talk out loud as they talked themselves through the puzzle. They would look at other’s code, not to cheat, but to understand what someone else did that was working. They became good at asking very specific questions and finding patterns in their code then replacing the patterns with loops. They learned about conditionals and if-then statements. My classroom became a very busy place!

This was probably one of the most interesting things that happened: All of a sudden, my students were looking at the world differently and thinking about ways to improve what they were doing. They became more engaged in other areas of school. I had one student who, on timed math fact games, didn’t get done as quickly as other students even though I knew she knew the information. However, If I had her code a puzzle on the computer for 15 before she started this math game, she was able to complete the game as quickly or quicker than other students. Therefore, by coding first, her brain became more engaged and allowed her to process other things better.

This coding class covered concepts taught to students in grades K-8. I did not tell my 3rd graders that they would be learning concepts taught to 8th graders initially. I did tell them that they would be learning advanced concepts and if they were willing to go on this journey with me we would purchase a LEGO EV3 kit to program. I told them we needed to be sure we could do programming before we moved into robotics. They went through this class and didn’t complain about difficulty. They just thought it was new material.

The next year, we learned to program the robot together. Later that year, they asked about coding games, so we coded a 5-level maze on Scratch. My students began asking how to program more and more complex things to make their games more realistic. They learned how to design their own sprites. My students no longer feared asking, “What do you think would happen if we did this?” They just tried it and if it didn’t work, they tried again. If it did work, they shared with their classmates to help them learn new skills.

As my students decided that they wanted to solve the puzzles, their determination soared. They became more confident and knew that they should be able to program their sprite to do what they wanted it to do. The question then just became “How?” While I didn’t have all the answers, I was always willing to help them search for the answer. I never told them they couldn’t program their sprite to do something. I always said, “Let’s see if we can figure it out.” And we did! We had a lot of days that might have seemed unproductive, yet they learned that if you really want something you have to work on it and through it. We learned we could debug and solve our problems. We were learning new skills in the process.

Through their 5-level maze, my students were able to share their creativity. They designed sprites, backgrounds, themes for the maze, and mixed music together. I learned which students were really into graphic design and which ones liked mixing music. They created stories to go with their mazes. They designed something very personal to them. Their engagement just soared while they kept adding more and more details.

This was so important. All of a sudden, my students put meaning to their learning. We went through the K-8 code.org course and they programmed the artist to draw different shapes and change the size of the shape they drew. Now they had a robot, so I asked them to program it to travel in a square. They were super excited because they knew they had done that before and were confident they could do it with the robot.

When they made their maze in Scratch, the questions they asked were very specific because they wanted their sprite to do something specific. Questions evolved to: “How do I make my sprite glide between here and here, not across the whole screen?” and “How can I make the background change when I touch the goal?” or “When it changes backgrounds, how do I get rid of this sprite?” Often by vocalizing the question, they were also breaking into the steps needed so then I’d hear: “Never mind, I think I got it.”. They found a purpose for what they were doing.

A lot of the puzzles, in the Code.org course, were how to draw shapes, creating conversations about angles, degrees, and sides. I often would say, ”There are 360 degrees in a circle” and we discussed the number of sides in a hexagon and the difference between an interior angle and an exterior angle. We talked about the 4 quadrants in Scratch so that they understood why x was negative in the upper left-hand corner, but y was positive. We talked about sequencing and how order of code, just like order of operations, is important. Math took on a whole new meaning for my students.

When my students were learning to code, gender became less of a barrier. I paid attention to each student and figured out some concepts in which they excelled. Then, whenever a student would ask me a question I could redirect them to the student who excelled in that area and say go ask “_______,” male or female. Eventually students quit asking me questions, they would just shout out, “Who can help me figure out…” They became a community of coders recognizing each had something to offer. They began telling their friends and it was an even mix of boys and girls all learning together. They helped each other test and debug their games. It improved their relationships outside of our classroom as well.

I learned through teaching my students to code, I was providing them with many more skills that would benefit them throughout their lives. My students became confident, productive, thoughtful learners. They understood life is full of challenges to overcome. They became ready to embrace new opportunities even when they weren’t sure they were ready for them This process has made me a better teacher and is something I continue doing with my students to help them become successful in school and life.

Join Adrienne in one of our classes at Create & Learn, where experts have created small, project-based classes focusing on STEM, computer science, and so much more!

Robot, Swimming & Atari Games - Oh, My! Meet Our Awesome Teachers that Will Get Your Kids Excited About Learning Coding!
How to Plan Your Child’s Computer Science Learning - Special Event with Our Founder & Teaching & Learning Innovation Lead
Subscribe for newsletter
Subscribe 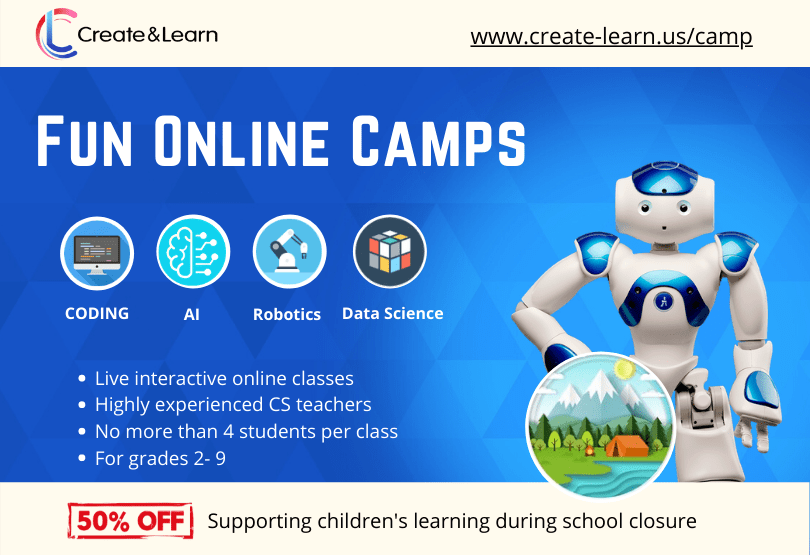